No-one knew that orangutans are unique among great apes, possibly unique among animals altogether with the exception of the human animal, in having the ability to talk about the past.

But now we do. Recently a researcher was surprised to find that the apes’ response to, say, a tiger’s presence is to gather their young to them and climb higher up the tree – in silence. You would expect the evasive action to be accompanied by an alarm call. Theirs is an endearing kind of “kiss-squeak” sound. Strangely though, they wait sometime until after the predator has entirely disappeared before they emit their kiss-squeak of alarm.

What on earth is the use of that, we ask. Isn’t that a bit late? Well, it seems the orangutan mums are transmitting a message to their infants, “THAT WAS DANGER! Remember for next time.”

Zoologists have a name for ‘talking about something that is in the past or the future, not present at the time’: it’s called ‘displaced reference’, and as well as being extremely rare among living creatures, is reckoned to be a sign of high-level cognition. These furry orange tree-dwellers may even surpass in brain power their other smart relations in the great ape family.

Another thing I didn’t know before today

Orangutans come in two varieties: the Bornean and the Sumatran. Both species are critically endangered. The Bornean orangutan has declined by a shocking 60% in the last 60 odd years, and between 1999 – 2015 alone we lost over 100,000. I say “we” because it’s a tragic loss for us all. It’s a similar story for the Sumatran ape. Orangutans rightly fear tigers, but there is another animal that is a much greater threat. As is almost invariably the case when species slide towards extinction, the menace is (the so-called) homo sapiens.

In this case it’s our insatiable appetite for palm oil. “More than half the packaged products on sale in the supermarket are made with palm oil,”  according to the European Palm Oil Alliance. It’s palm oil production that is decimating these precious animals.

And it’s not just the injurious effect on the hapless apes, as if that were not enough in itself. The burning and deforestation of Malaysian and Indonesian rainforest to make way for palm oil plantations is a big contributor to GHGs in the atmosphere. In the light of the UN’s recent report that we have only 12 years left to get a grip of climate change, this destruction is a supremely urgent environmental issue which affects the entire planet.

If there was anyone who wasn’t aware of what is causing the frightening decline in orangutan numbers before, they certainly are now thanks to the furore created by the banning of Iceland’s Christmas ad. In case you’ve only just returned to Planet Earth from a trip to Mars and not yet seen the ‘offending’ ad, here it is:

The ad was banned on ‘political’ grounds. If you’re like me, you’ll struggle to find anything political in the ad.

So why ban the ad?

Greenpeace has unearthed some revealing correspondence between various UK government departments. The communications expressed fears that supporting an EU-wide ban on the import of palm oil biofuel might very well provoke Malaysia to change its mind about buying our British-built Eurofighter Typhoon jets, and look elsewhere for its military hardware. So yes, no doubt in governmental eyes the ad is political, though we wouldn’t be so cynical as to suggest Clearcast, the adjudicator of TV advertising that imposed the infamous ban, has been sat upon, would we??

The other reason given for the ban was that it had nothing to do with Christmas. It’s certainly not what you think of when ‘Christmas’ is mentioned. I think Greenpeace supporter and Iceland’s CEO Richard Walker knew exactly what he was doing when he sought permission from Greenpeace to adapt their telling animation for his company’s Christmas promotion. It was always unlikely to pass the scrutiny of Clearcast.

But thanks to the notorious ban, the ad hit the headlines. EVERYONE wanted to see what all the fuss was about. I know I did. And as of Wednesday just gone, the ad notched up 12 million views on Facebook, a further 3.8 million on YouTube, 30 million in total across all social media, with endorsements from celebrities including Anna Friel, Paloma Faith and James Corden. What better way of getting Greenpeace’s important message across, and at the same time promoting Iceland as a leader in business environmental- friendliness.

“So until such a time as there is genuinely sustainable palm oil that contains zero deforestation, we are saying no to palm oil.”

And just in case the publicity was not enough

It’s been ramped up even further by sightings of an orangutan wandering the streets and parks of London, even at one stage hanging from a Christmas tree on Coin Street.

The ape on the loose is Iceland’s genius response to the ban of their Christmas ad. But we don’t have to worry, no orangutans were harmed etc etc – the creature is of course animatronic.

All perfect timing on Iceland’s part, for this week saw Greenpeace publish a report accusing the makers of the world’s most famous cookie the Oreo amongst many other products, of sourcing their palm oil from “rainforest destroyers.” 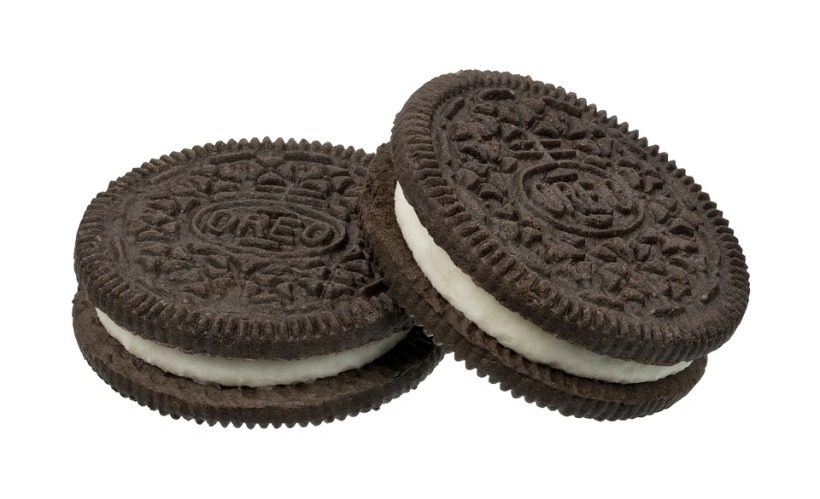 But why the huge demand for palm oil in the first place?

It has two huge advantages over other forms of fat

If you’re interested in why palm oil makes up 38% of all vegetable oil produced, from only 5% of oil-producing farmland this is an excellent article.

What is palm oil used in?

Half the stuff in supermarkets, as mentioned earlier. That is biscuits, cereals, breads, gravies, sauces, margarines, ice cream, crisps, ‘healthy’ snack foods like muesli bars, pet food, cosmetics, toothpastes, toiletries, cleaning products, even ink. Sad to say, it also pops up in vegan goodies where it is used to provide the creaminess otherwise obtained from dairy.

And then there is the biofuel.

We haven’t spotted it on labels, though. How is it hiding in our products?

Until 2014 there was no legal obligation to identify palm oil on a label as anything more than ‘vegetable oil’. But even now it might be hiding behind any one of these aliases:

Even the most passionate environmentalists are not suggesting we avoid palm oil altogether. We just need it to be orangutan- and rainforest-friendly. Sustainable.

Just look for these logos

Stop a billion-dollar gift to the palm oil industry!

And take the 28 day challenge to live deforestation-free

Further reading – Palm oil is unavoidable. Can it be sustainable?

28th December 2018 Christmas ad conundrum: Is a palm oil boycott the way to save apes?

24th January 2019 The double-edged sword of palm oil “Contrary to a widely publicized narrative of deforestation driven by industrial-scale expansion, the researchers found most oil palm expansion and associated deforestation occurred outside large, company-owned concessions, and that expansion and forest clearing by small-scale, non-industrial producers was more likely near low-yielding informal mills.”

Are Meat & Dairy Really Bad for Sustainability & the Planet? UN Scientist Says Not

Are You Really Helping the Planet Eating Plant-Based? Yes! & This Awesome App Shows You Just How Much

The Living Planet Report: Our Dinner Plates Are Destroying Life on Earth