“This was just a small, tiny, organic, nice gesture of kindness and it’s resonated with people all across the country. Anybody can do it. It doesn’t have to a be big thing; it can just be walking a dog.”

Luis Escobar, coach at Californian high school St. Joseph’s one day surprised his runners with a bunch of four-leggers super keen to join them on their run – pooches normally cooped up in the Santa Barbara County Animal Shelter.

Fun was had by all, regardless of leg number. Luis made this little video.

As you can see, all relished being out in the big wide world, though one was a bit of a tortoise. And Fred – well Fred preferred to travel in style (reminds me of my own rescue canine!) It proved for him a tactic with a payoff, because he scored himself a nice new home – runner and ‘Fred-carrier’ Josh Menusa and his family ended up adopting him.

As if this little story is not wonderful enough, after Luis posted his video on Facebook, his simple but genius idea caught fire and spread all over the country. And why wouldn’t it? Runners love to run, and so do pups – a match made in heaven.

A good run-out, yes that makes sense, but books? For dogs? Seems the mutts are particularly partial to a good animal yarn. But if you’re letting your imagination run wild with visions of ‘The Hound of the Baskervilles”, “Lassie”, and “101 Dalmations” lining the walls in dog pens, let me bring you gently back down to earth. Dogs are clever but not that clever. Or maybe they are, because they let us do the work for them and in some choice shelters they have a child human read to them. Why keep a dog and bark yourself, is what they say.

The kids sit on the floor in front of the pens so it’s the dog’s choice how much he/she wants to interact. It’s a quiet gentle activity that seems to have a calming effect on stressed animals.

“It helps shy and fearful dogs overcome their insecurities and increase their chances of being adopted.”

This little guy is rapt!

And everyone’s a winner:

Why not find out if your local shelter has such a scheme, and if not, suggest they might like to start one.

Our third genius idea really is genius! Where do folk rustle up these amazing ideas? I wish I knew. Here you go – optical illusions

Under the slogan, “There’s always room for more. Adopt”, World for All in Mumbai, India commissioned these marvels that speak better than words because they speak to the heart. 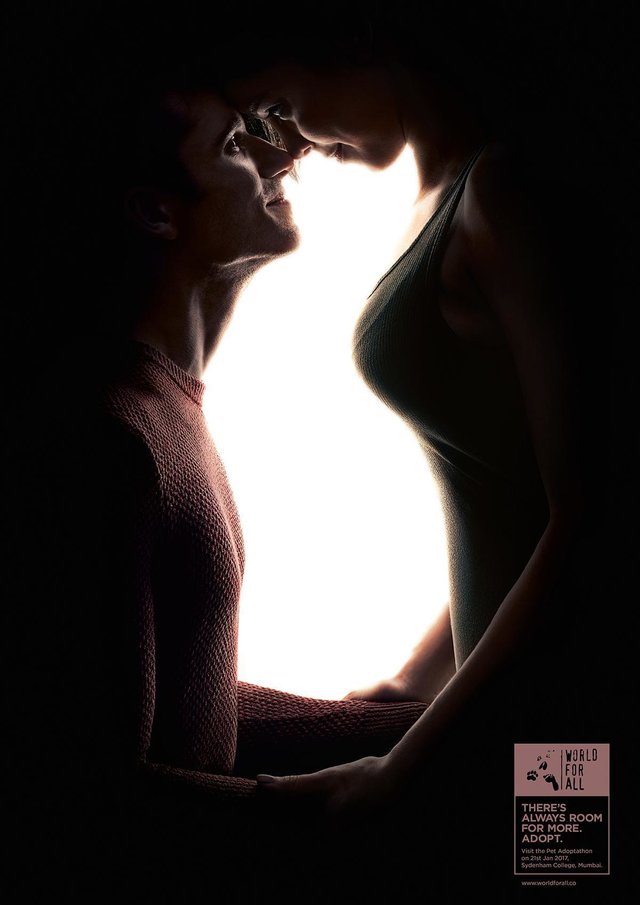 What family could resist finding a place in their lives for a needy animal after seeing these? The pics’ impact was huge. Attendance at the adoption event was up 150 percent from the previous year, and saw 42 adoptions. The plan is to repeat the event yearly after such phenomenal success.

Thanks to the Dodo for that uplifting story

So there we have it – three stories of fun ways to help get animals out of shelters and into loving homes. When you decide to get a dog or a cat to make your home complete, ‘paws’ for thought, and ADOPT, DON’T SHOP.

Just look at these sad statistics:

And they are not just numbers. Each individual one an aching heart just crying out for a loving home. #AdoptDontShop Helping Abused or Abandoned Animals

To end on a brighter note, a bit of doggy fun for dog slaves everywhere.

The Amazing Abilities of Dogs – Take the Quiz here

6 Good Reasons to Pass Up on Crufts