In one and the same week gorillas, real and metaphorical, hit the headlines twice. First we had the sinisterly comic Nigel Farage likening Trump to a “big silverback gorilla”, and then The Mail’s headline screaming at us:

“How ‘psycho’ gorilla made a bid for freedom by smashing the window of a ‘cracked’ enclosure”, quoting a keeper at London Zoo. ‘He’s a f*****g psycho, that ape.’

King Kong has a lot to answer for.

In spite of that sensational headline and quote, the Mail’s article depicted Kumbuka, the gorilla who escaped from his enclosure at London Zoo, with far more understanding – and sympathy – than did that keeper. In my opinion London Zoo should lock him in a cage and throw away the key. No-one that ill-informed, callous and insensitive should be let anywhere near an animal.

Kumbuka was born in captivity, in Belfast Zoo, and was rejected by his mother. Throughout his sad childhood he was shipped on from one zoo to another. The poor guy had known nothing but loneliness, captivity, and exposure to crowds from which there is no relief. Now, at least in London Zoo he has his own family troop, his mate Mjukuu, his daughter Alika, which means ‘most beautiful’, and his son Gernot. And there are two other female gorillas in his troop.

But the problem of relentless exposure to noisy crowds remains. Gorilla Kingdom at London Zoo is a brand new enclosure costing £5m, but gorilla expert Ian Redmond criticised the poor design of the enclosure as too exposed to visitors, long before Kumbuka’s escape. And Sir David Attenborough agrees with him, and lambasted zoo visitors who are not respectful to the animals.

Leading primate expert Professor Phyllis Lee reads Kumbuka’s break-out as far from ‘psychotic’. More likely to be down to “crisis and desperation” at his intolerable situation. That zookeeper on the other hand, reflected the commonly-held perception of the gorilla. A perception in which there is little truth.

It’s true that a male gorilla can occasionally display aggressive behaviour when frightened or stressed. Gorillas in captivity live in situations that couldn’t be more different from their natural environment, a factor hugely stressful in itself. Imagine yourself confined in that enclosure day after weary day, exposed to crowds of noisy onlookers. And how could Kumbuka not get frightened and stressed when zoo visitors were, unforgivably, banging on the windows of his enclosure before his escape last week.

Tragic Harambe had visitors at Cincinnati Zoo screaming and shouting at him when the boy fell into his enclosure. We do not know how he would have responded to such a stressful situation. But the assumption was made, true to that popular misconception, that a silverback was “a violent brute that would kill a human on sight”. And so, to the grief of wildlife- and animal-lovers everywhere, Harambe’s ‘keepers’ shot him dead. 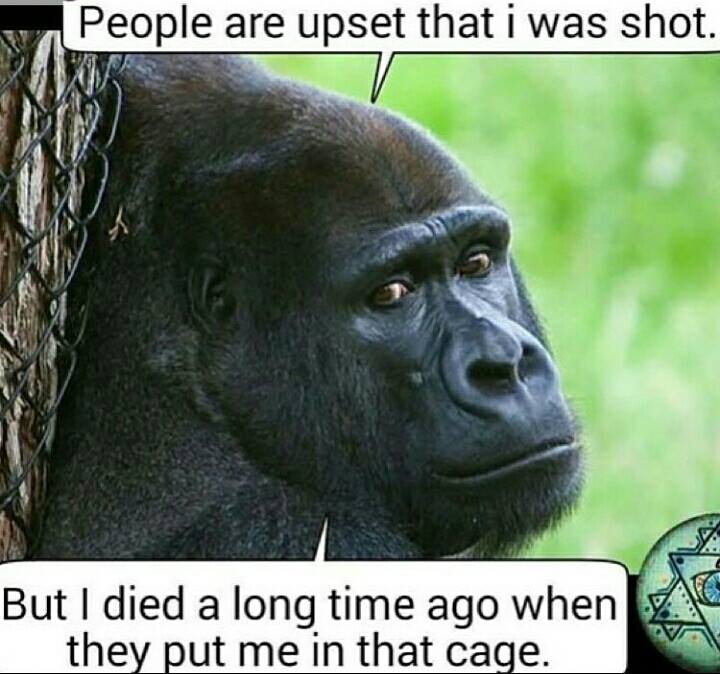 It’s a sad fact that the way we use language reveals a massively negative bias against animals. Take a look at What a Pig! What a Swine! What a Rat!, for instance. Very few animal names get applied to humans in a complimentary way. You have a definite intention to insult when you call someone a hog, a pig or a swine, a sheep, an ape, a donkey, an ass or a mule, a snake or a rat, a shark, a gorilla, a louse, a skunk, or a toad….

For at least 200 years, the word ‘gorilla’ has been shorthand for brain-dead bruiser, mindless thug. Contemporaneously, “an 800lb gorilla” means an individual, business, or organisation so big and powerful they can throw their weight around with impunity, trampling us lesser folk underfoot as they go. Mmm, does sound a bit like Donald Trump – though he may be about to find out he doesn’t have quite as much substance and reach as his ambition leads him to imagine!

(A little footnote to that: silverback gorillas weigh-in at about 400lb, not 800. An 800-pounder would be clinically obese.)

As for ‘gorilla’ being synonymous with ‘alpha male’ behaviour, Guardian journalist Ros Coward is not happy, not one bit, at the Trump comparison. She wants to set the record straight: “The animals don’t display ‘alpha-male’ behaviour like genital groping – and being associated with the Republican candidate is, frankly, bad for their image.”

So, a thorough makeover of the much maligned gorilla’s image is well overdue. Though in reality it’s more of a ‘make-under’, because what we want is to strip off those layers of false perceptions, and get back to the truth.

Before Dian Fossey’s 22 years of research in the forests of Rwanda, “gorillas had an appalling reputation as violent brutes that would kill a human on sight. Fossey demolished this myth. Living alongside a group of mountain gorillas in the forests of Rwanda, she showed that these huge apes are actually gentle giants, with individual personalities and rich social lives. In many ways they are like us.”

“The gorilla is one of the most maligned animals in the world,” Fossey wrote. “After more than 2,000 hours of direct observation, I can account for less than ﬁve minutes of what might be called ‘aggressive’ behaviour.”

The silverback does indeed fulfill the role of protector and main decision-maker of his troop. And yes, he really does beat his chest and roar to warn off enemies. That much is true. But rather than being aggressive by nature, it is much more usual for him to be gentle, sociable and affectionate, in some troops co-existing happily with other males.

This is a beautiful little video of a silverback acting as ‘lollipop man’ and seeing his entire family group safely across the road.

His other responsibilities include mediating between squabbling family members, leading his family to the spots where the best food is to be found, and of course, mating with his females.

Ian Redmond, who worked closely with Dian Fossey talks about ‘habituation’, the way of studying gorilla behaviour that Fossey pioneered. It meant living with gorillas like a gorilla, and being accepted by them as part of the troop. This eventually led to real human-gorilla friendships, says Redmond

“I mean that seriously. Gorillas are so like us and they can see they’re like us. They are as fascinated by us as we are by them. They actually inspected us physically, pulled our lips down and looked at our teeth. They were very curious about this gorilla-like animal that does such different things [to them].”

But back to Kumbuka. Zoological Director of ZSL Professor David Field has given us a very different version of the silverback’s dramatic escape – not so dramatic after all. Kumbuka, he says, was not frenzied and stressed, but calm and curious, taking advantage of a not-yet locked door to wander into the corridor and explore the adjacent food stores. He must have felt like a kid in a candy store. He helped himself to some blackcurrant squash and glugged down 5 undiluted litres of the stuff – some sugar rush! – before being tranquilised and guided back to his den. Absolutely no smashed locks or windows.

So Kumbuka has his family in London Zoo, he has ample food (and blackcurrant squash), and he has instant medical care whenever he may need it. But what he does not have is his freedom. Instead he is imprisoned, and put on display.

The saddest thing about his momentary escape is that the enormous publicity will do nothing but bring bigger crowds of visitors to invade his privacy, gawking and gesticulating at him through the glass.

Isn’t it time to free these innocent prisoners, and give them the protection in the wild these gentle giants need? Protection from us, the humans?

Ask Cincinnati Zoo to release their gorillas to a sanctuary here

Vote in poll: Should Wild Animals Be Kept in Zoos? here

Or to the Gorilla Fund International here

How ‘psycho’ gorilla Kumbuka made a bid for freedom – The Mail

The woman who gave her life to save gorillas – BBC Earth

One thought on “Donald Trump ‘a silverback gorilla’? Time to makeover the gorilla’s image!”