On behalf of Taylors of Harrogate may I welcome you to the Grand Beedapest Hotel!

Here at reception can we just check your credentials before you sign in? Forgive the impertinence but we do have to count your legs. Six? Perfect. Now if you wouldn’t mind trying us with a little buzzing? Music to the ears. Come right in. Please avail yourself of all our five star luxury facilities.

Maybe you would like a dip in the Peppermint Leaf Pool before dining in the Rose Lemon restaurant? We’ve given you the Sour Cherry bedroom. I hope that meets with your requirements. The gym? Next to the pool, ground floor. Enjoy your stay, Madam!

I particularly love the bees ‘using’ the gym in this little video!

This is all frivolous fun, nonsense of course, but nonsense with a deadly serious purpose. The famous tea company Taylors of Harrogate is using their colourful quirky Grand Beedapest Hotel (inspired, you guessed, by the Wes Anderson movie) to launch their campaign to raise awareness of the bee’s importance to the world, which is out of all proportion to the little insect’s humble size. Because all our buzzy little friends not lucky enough to be in residence at Harrogate’s Grand Beedapest are in trouble.

Bees have a problem 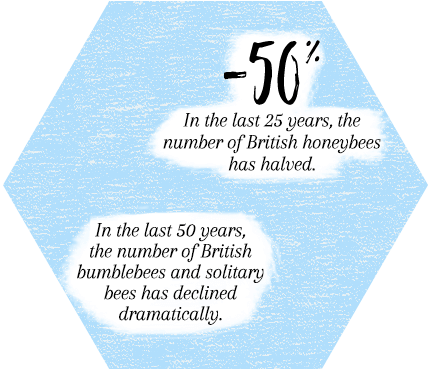 There can’t be anyone who isn’t aware of the frightening decline in bee populations all over the world. Taylors puts it down to the expansion of urban areas, shrinking flower meadows and natural habitats, and pollution. But perhaps not wishing to look ‘political’ or tread on powerful toes, they omit to specify The Big One – pesticides and in particular neonicotinoids*.

Greenpeace has no such qualms about proffering the information: they tell us that biologists have found more than 150 different chemical residues in bee pollen, a veritable “pesticide cocktail” **- a tipple most definitely NOT on offer in the Rose Lemon restaurant of the Grand Beedapest.

Unfortunately the bees and their supporters are up against Bayer, Dow, Monsanto and DuPont, four monstrous megacorporations making vast profits from pushing these chemicals, who have a stranglehold over almost the entire world market for pesticides (and genetically modified  plants and seeds). In 2012, Monsanto for instance, reported net sales of approximately 13.5 billion U.S. dollars. Monstrous in their size, monstrous in their power and influence, and monstrous in the damage they are wreaking on the planet.

Why the bees’ plight matters

If saving the bees for their threatened selves is not enough, nor even because they are the ecological ‘canary in the coal mine’ that gives warning of the degradation of the natural environment, let us at least save them for our own survival. 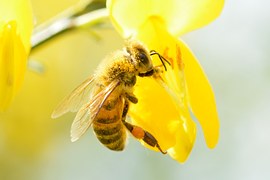 It’s not just the ingredients of Taylors’ teas that are at risk, important as they no doubt are. Three quarters of our food crops rely on pollination by that hard-working insect and other insects, also badly affected by pesticides. If we love almonds, apples, broccoli, asparagus, cantaloupes, cucumbers, pumpkins, blueberries, watermelons, cranberries, and cherries … and on and on, and want to keep on eating them, we really need to take action for the bees.

“Believe it or not, you have a bee to thank for every one in three bites of food you eat” Greenpeace. No doubt more if you’re vegan.

So what does the world need to do?

Easily said, but imperative to act on:

What is the situation vis à vis neonicotinoid pesticides here in the UK?

The EU imposed restrictions on the use of neonicotinoids in 2013. The UK’s Tory government voted against the restrictions – well, there’s a surprise. Nonetheless the EU ruling does still apply to us until Brexit is completed, which will be another two years after Article 50 is activated. Theresa May’s government says it will uphold the restrictions post Brexit completion, provided “science proves them necessary.” Hmm. Defra doesn’t exactly have a good track record when it comes to basing its policies on scientific evidence – ask the poor badgers.

Unsurprisingly, the National Farmers Union has opposed the neonicotinoid ban from the word go. We have them to thank as usual for their vigorous lobbying against, it seems, all measures intended to protect our wildlife and the environment. (There is a get-out clause in the EU neonicotinoid restrictions, which NFU members have been happy to exploit. In ’emergencies’ farmers can apply for a licence for a temporary exemption from the ban.)

So what IS the science?

The results of a recent study have just been published in the Journal Proceedings of the Royal Society:

“This could have severe consequences for colony fitness, as well as reduce overall genetic variation within honeybee populations,” the scientists concluded.

What are other countries doing?

And then there are the glyphosates

Glyphosates are herbicides used to kill plants, not insects so what is the problem with herbicides? Well, bees’ awesome navigational skills are legendary, aren’t they? But in a study last year, it was shown that glyphosates like Monsanto’s Roundup impair bees’ spatial learning process, and so disorientate their flight trajectories. That cannot be good.

What can we do?

The obvious and simple thing we can all do is never to use pesticides and herbicides in our own gardens. The butterflies, birds, hedgehogs, frogs and toads, as well as bees will thank us.

At national level, we need to bring people power into play. The NFU has the Tories in its pocket. So we need to raise our voices even louder against these deadly chemicals that are threatening our food security and decimating our insect life, our biodiversity and our countryside. Be a voice for bees!

3rd March 2018  Pesticides put bees at risk, European watchdog confirms But this is GOOD news because an EU ban is most likely to follow.

31st May 2019  A combination of agrochemicals shortens the life of bees, study shows

Another amazing video to watch – bee-inspired artwork at Kew

When Bees Go Extinct, These Ten Foods Will Follow – One Green Planet

Make Your Own Seed Bombs for Bees

Bees, Neonicotinoids and the EU

Greenpeace: Save the Bees

Friends of the Earth: Why are bees celebrating in Dorset and France?

7 thoughts on “A Night at the Grand Beedapest Hotel. Be the Voice for Bees”