THE BEST NEWS YOU’VE HEARD SO FAR THIS YEAR?

It most certainly is for me! For me this is so obvious, so reasonable that no legislature could turn it down. I hope and pray Canada will take the lead here, and the rest of the world will quickly fall into line.  Here is the charter, and below the exciting campaign Animal Justice Canada has launched

ANIMAL CHARTER OF RIGHTS AND FREEDOMS

Whereas non-human animals experience both suffering and pleasure in the same way that humans do;

Whereas discrimination on the basis of arbitrary characteristics, such as species, is a violation of equity, natural justice and the rule of law;

Whereas our legal system must not exclude the most vulnerable members of society;

1. Animals have the right to have their interests represented in court.

2. Animals are persons under the law.

3. Animals under human care have the right to be free from pain, injury or disease.

4. Animals under human care have the right to be free from abuse and neglect.

5. Animals under human care have the right to be free from fear, and emotional and psychological distress.

6. Animals in the wild have the right to live free from human intervention or exploitation.

7. Animals under human care have the right to adequate, species-appropriate food and water.

8. Animals under human care have the right to safe, clean, and comfortable shelter.

9. Animals in the wild have the right to enjoy a clean and ecologically sound natural habitat.

10. All animals have the right to socialize with friends and family in a manner that is appropriate for their species.

11. All animals have the right to engage in normal and natural behaviours.

Animal Justice Canada has launched Canada’s biggest-ever animal protection billboard campaign, with 68 billboards up across Toronto and Vancouver in January and February of 2016.

The campaign’s four different designs draw attention to the tremendous suffering endured by animals used for food, testing, fashion, and entertainment. The 10 by 20 foot billboards call on Canadians to protect animals by signing the Animal Charter. So far 5156 have signed.

The billboard series shows how the everyday actions of Canadians are leading to heart-breaking animal cruelty. In one ad, a visceral line is drawn between the fur trim of a jacket and the terrifying experience of a coyote powerless in a trap.

In another, the recent bacon fad is held up against an already roughed-up little piglet starting her life of misery within the factory farming system. 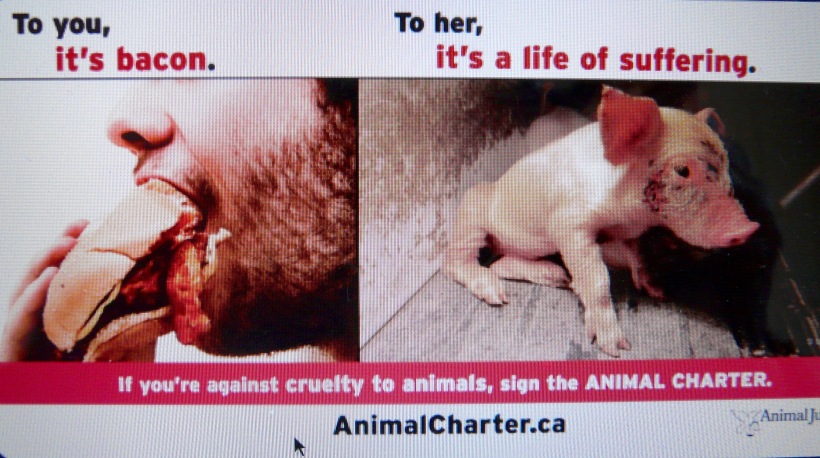 In a third ad, teenagers merrily applying make-up beside an image of a rabbit devastated by toxicity tests invites the question: why is cosmetic testing not banned in Canada? 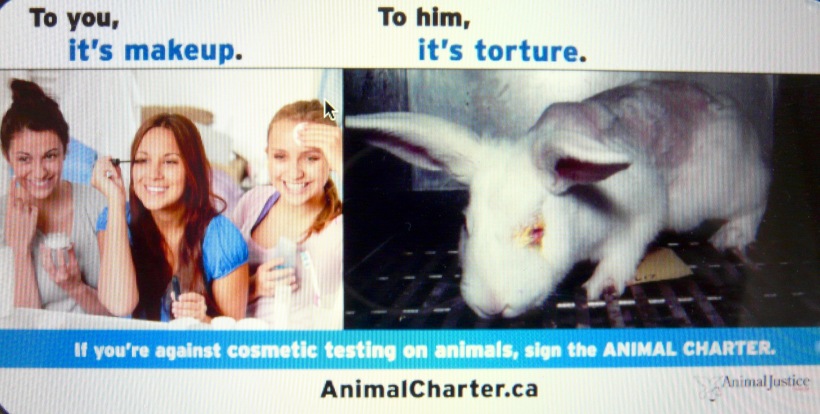 The fourth ad juxtaposes what many would consider a harmless trip to the zoo with the chimpanzee on the other side of the bars who will never get to go home.

The campaign asks viewers to sign Animal Justice’s AnimalCharter of Rights and Freedoms. Each signature helps Animal Justice in leading the legal fight for animals in Canada.

For more on Animal Justice.

MAKE A DONATION
GIVE TODAY »
NEWSLETTER
Receive the latest news and action alerts from Animal Justice
SUBSCRIBE
Connect With Us!