SeaWorld will end theatrical orca shows at its theme park in San Diego next year as part of a comprehensive overhaul of the company in the wake of mounting protests over its treatment of animals. 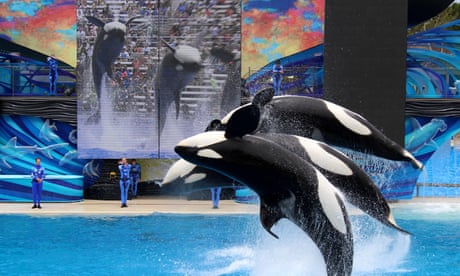 Joel Manby, SeaWorld’s chief executive, said he had listened to guests’ criticism of its Shamu stadium whale circus and it would end the “theatrical killer whale experience” in San Diego by the end of 2016.

He said the company will replace its Californian Shamu show – in which whales dive, jump and splash guests to the demands of their trainers – with “an all new orca experience focused on the natural environment [of the whales]”.

“We are listening to our guests, evolving as a company, we are always changing,” Manby said as he unveiled a new corporate strategy on Monday. “In 2017 we will launch an all new orca experience focused on natural environment [of whales]. 2016 will be the last year of our theatrical killer whale experience in San Diego.”

He said the decision to end the orca shows in California was in direct response to customers, who he said had made it clear that they want less of a theatrical experience and would rather see the whales in a more natural setting. Attendance at the San Diego park is falling fast. Visitor numbers dropped 17% last year to 3.8 million, according to city authorities, and Manby warned investors last week that numbers are still falling and would contribute to a $10m hit to SeaWorld’s profits this year.

The orca whale theatrical performances will continue at SeaWorld’s other killer whale parks in San Antonio, Texas, and Orlando, Florida.

Manby told investors in a webcast on Monday that the company was going to refocus on conservation of animals rather than using them as entertainment. “People love companies that have a purpose, even for-profit companies,” he said.“Just look at WholeFoods … I don’t see any reason why SeaWorld can’t be one of those brands.”

SeaWorld’s change in direction comes as the company battles against a mounting public backlash after Blackfish, which focuses on the death of a trainer who was dragged into the water and drowned by an aggressive bull whale, helped turn what was a fringe animal rights issue into a national and international debate. Celebrities including Harry Styles, Matt Damon and Jackass’s Steve-O have waded in, pushing the anti-SeaWorld message to the company’s target youth market across the world.

The backlash has hit the company, and its investors, where it hurts. SeaWorld has lost half of its market value since the 2013 release of Blackfish, a film cataloguing alleged mistreatment of killer whales at its parks. The shares trod water at about $18 on Monday.

SeaWorld’s decision comes just days after congressman Adam Schiff said he would introduce legislation forcing SeaWorld to end the captivity of orcas. “The evidence is very strong that the psychological and physical harm done to these magnificent animals far outweighs any benefits reaped from their display,” Schiff said. “We cannot be responsible stewards of our natural environment and propagate messages about the importance of animal welfare when our behaviors do not reflect our principles”

“The decision by SeaWorld to phase out killer whale shows in San Diego is a welcome step along the path towards ending the captivity of these magnificent creatures,” Schiff said on Monday after SeaWorld’s announcement. “Much more needs to be done, however, and I would urge the company to curtail the breeding of their orcas and partner in the creation of ocean sanctuaries. The fact still remains that as long as SeaWorld holds orcas in captivity, the physical and psychological problems associated with their captivity will persist.”

Peta, the main animal rights charity campaigning against SeaWorld, said the end of the “tawdry circus-style” Shamu shows was “inevitable and necessary”. “But it’s captivity that denies these far-ranging orcas everything that is natural and important to them,” Jared Goodman, Peta’s director of animal law, said. “This move is like no longer whipping lions in a circus act but keeping them locked inside cages for life, or no longer beating dogs but never letting them out of crates.

“As Schiff indicated when he introduced the federal orca-protection bill, no change to SeaWorld’s tanks will be sufficient to satisfy the needs of these animals. That’s why Peta is calling on SeaWorld to stop breeding orcas and start building sea sanctuaries where they can experience an actual natural setting and finally thrive.